Congratulations to Robbinsville High School’s Team Nemesis on their win at the Hatboro-Horsham FIRST Robotics District Qualifier! Allied was a proud supporter of the team, donating 300 feet of GPT wire in the three sizes used most often in its robots.

This year, Team Nemesis built a 2 foot tall robot named Bellerophon that used an articulating claw to gather balls and shoot them into goals. In its recent Aerial Assist℠ challenge at the qualifier, the robot had to score goals in an autonomous round, during which it had to operate without a driver, followed by a round where a driver was able to control the robot remotely.

Team Nemesis ruled the field and came out on top as the Hatboro-Horsham District winner. Watch their robot (# 2590) in action at the competition: www.youtube.com/watch?v=6qvtQjNlEgM. Team Nemesis also took home the Entrepreneurship Award, recognizing its Finance and Marketing Team for their comprehensive business plan and entrepreneurial enthusiasm. The talented students that comprise Team Nemesis are sure to go on to do great things, and Allied is happy to help them achieve their goals! We wish them the best of luck at the upcoming Lenape-Seneca competition. Go Team Nemesis! 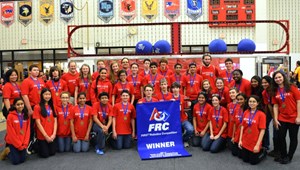